Sometime in December 2014 Tom Wahl made a claim on the Practical Farmers of Iowa list serve that 16 families could make a living farming on 160 acres using an agroforestry system. Below he gives more details on his claim. Edits have been added.

These figure comes from my own personal experience in growing and marketing chestnuts, plus yield data from the University of Missouri Center for Agroforestry and from Kansas State University. The full answer would be long and complicated. I am working on a book (to be published by Chelsea Green Co.) that will explain this all in detail, but for now I will give the “short” answer.
As you could probably guess, the most important component in my agroforestry system is chestnuts. I have been telling people for years that one reasonably fit adult should be able to manage 10 acres of chestnuts by his or herself (labor for harvesting being the limiting factor). 10 acres of chestnuts, well managed on a good site, should be able to produce 3500 to 4000 lbs per acre of nuts, for a total of 35,000 to 40,000 lbs on the 10 acres. This would be for a “mature” level of production, but that can be reached in 12 to 15 years from the initial planting. In Iowa, the nuts wholesale for $2 to $3 per pound, so the 10 acres should generate $70K to $120K per year.

That is just for chestnuts. You could put a pawpaw tree underneath every chestnut tree. Pawpaws are natural understory trees and can produce 50% to 75% of a full crop even in fairly heavy shade. Dr. Patrick O’Malley estimates that pawpaws in Iowa should bear around 14,000 pounds per acre (in full sun). Pawpaws can wholesale for as high as $7 to $10 per pound. [we plan to sell you-pick pawpaws for $4.00/pound in 2015] Under the pawpaws and chestnuts you could add shade-tolerant berry shrubs such as gooseberry, currant, and honeyberry. On the ground, in the more exposed areas, you could grow perennial vegetables such as asparagus, rhubarb, and horse radish. In the shadier areas you could add high-value medicinal plants such as ginseng and goldenseal.
Even though this takes 12 to 15 years to reach this level (and that is assuming no disasters such as extreme weather events), this does not mean there is no income leading up to this point. Chestnuts can begin bearing in as little as two years from planting, and can reach 350 lbs per acre by year 5.
I am sorry that I can’t point you to university research documenting all of these figures, but there just aren’t any universities doing this. The best university info on agroforestry comes from U of Missouri Center for Agroforestry www.centerforagroforestry.org, including a 12 page summary on chestnut growing. – Tom Wahl

Let me tell you a story. The Chinese gooseberry, Actinidia deliciosa, a perennial vine native to eastern Asia, was grown as an ornamental for centuries. Even though it produced a fruit, few people consumed it and it was never found in the market. A few decades ago some enterprising New Zealanders decided to take the Chinese gooseberry commercial. They changed its name and came up with a marketing campaign. Today, kiwi is popular all over the world.

There are thousands of fruits around the world that are seldom or never found in commerce. Of these, dozens – perhaps hundreds – are well suited to backyard culture and home use. Some of these could become commercially popular if more people knew about them. One example is Actinidia arguta, the hardy kiwi.  Hardy kiwi fruit is a smaller (about the size of a grape), sweeter, and m

ore flavorful relative of the fuzzy kiwi found in stores. Its smooth skin does not need to be peeled. The vine is vigorous to the point of being rampant, requiring a very sturdy trellis to support the fruit load of up to 200 pounds per vine. They come in male and female; males produce no fruit, but are required for fruit production on females.

Another little known fruit with potential is the goumi, Eleagnus multiflora. This small tree or large shrub is a non-invasive re

lative of the invasive pests autumn olive and Russian olive. The potentially heavy crops are sweet-tart and cherry like in size and flavor, but without the pest and disease problems associated withcherry production.  It is hardy through zone 5.

Che, Cudrania tricuspidata, sometimes called “melon berry” or “silk thorn” is a Chinese relative of our native Osage orange. Che fruit resembles Osage orange, but is only 1” – 2” in diameter and deep red when ripe. A more important distinction is that while t

he larger Osage orange is inedible, the fruit of the che is chewy but delicious. The flavor is said to resemble a mix of mulberry and fig, both of which are related to che. Though it usually only reaches the size of a large shrub or small tree, che can produce up to 400 pounds of fruit. The long growing season required to ripen the fruit limits the production to zone 5b and south. Development of earlier ripening cultivars could potentially extend its range northward. Like the kiwi, che comes in male and female, but unlike kiwi, some female che will bear seedless fruit without a male nearby.

The Cornelian cherry Cornus mas, is not a cherry at all, but a type of dogwood native to Europe and Asia. Like the goumi, it can produce very large crops of bright red, sweet-tart fruits on

a large shrub. The fruits are similar in size and flavor to pie cherries. Also like the goumi, it seems to be unbothered by pests and diseases. Even Japanese beetles seem to leave them alone. They are cold-hardy though zone 4.

A close relative of Cornelian cherry is the kousa dogwood.  In early spring it is covered by large, showy white flowers like our own native flowering dogwood, but on this eastern Asia native the flo

Mayhaw is a term applied to hawthorns, Crataegers sp., that are highly prized for their fruits. In the stricte

st sense, mayhaw is C. aestivalis, a species native to the southeastern US. Mayhaw fruits are small, bright red, tart, but rich tasting. The shrub or small tree can tolerate a very wide range of conditions but is usually found on wet or even swampy sites. The mayhaw flowers and fruits very early for a hawthorn. In the Deep South, fruits ripen in May, hence the name. Devoted fans of the mayhaw claim it makes the very best jelly in the world.

More broadly, “mayhaw” may be applied to any of several other species of hawthorn with high quality fruit. Most of these are native to the northeastern US and their fruits ripen in the fall. Arnold hawthorn, C. arnoldiania and scarlet hawthorn, C. pedicellata are a couple of the better known hawthorns with commercial potential.

Medlar is a relative of hawthorns, apples and pears. The fruit of this Eurasian shrub or small tree was one of the most commercially important in Europe during the Middle Ages, but has since fa

llen into obscurity. The mature fruit is brown, hard, 1” – 2” in diameter, and somewhat resembles a small apple or pear, but with a very large calyx or “blossom end”. This characteristic gave rise to the fruit’s old common name “open arse.” Mature fruit are too hard and astringent to eat. They must first go through a process of over-ripening called “bletting.” When they reach the point of becoming mushy, fully bletted medlars take on a flavor and consistency of applesauce spiced with cinnamon. To eat the fruit you bite a hole in the tough skin and suck the pulp, using your teeth to strain out the large, hard seeds. It is no wonder the fruit has fallen out of favor, and it is not grown commercially anywhere in the world today. Where i
s the commercial potential? Certainly it is not with the general public. On the other hand, even in isolated rural areas you can find groups of people who will spend hundreds or even thousands of dollars to dress up in Medieval costumes to attend “Madrigal Dinners” or “Renaissance Faires”. Just imagine what you could charge if you were the only supplier of authentic bletted medlar fruit to su
ch an event! – Tom 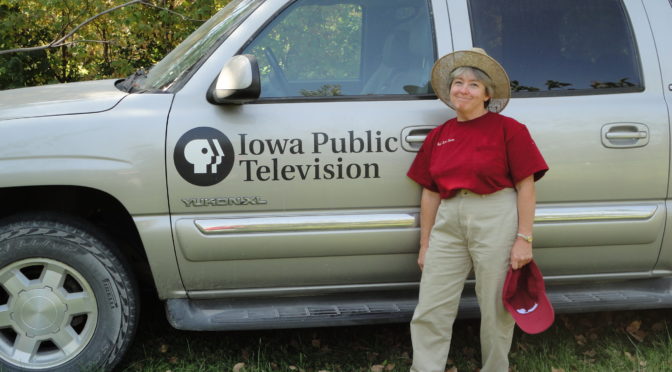 June  of 2013 Iowa Public Television visited Red Fern Farm to tape a session for a new show called Iowa Ingredient. We had a wonderful time with the film crew and got to meet  Cari Nebe as she drove into the grove to tape the intro for the show. 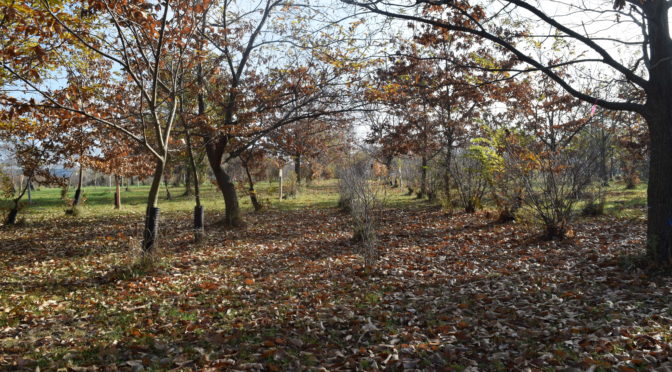