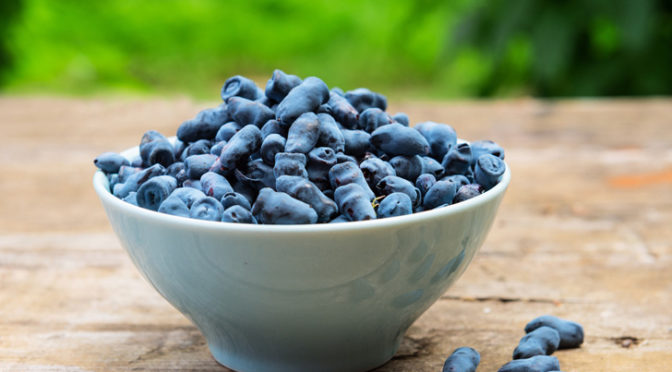 Lonicera cearulea – blue honeysuckle, AKA “honeyberry”, “haskap” , and “mountain fly honeysuckle ” – by whatever name you call it, this plant is generating some excitement for its potential as a commercial crop.

The dark blue berries produced on small, multi-stemmed shrubs 2 – 6 feet tall are similar in size and flavor to blueberries. Like Aronia berries, honeyberries have 3 times more antioxidants than blueberries, but unlike Aronia, they taste good right off the bush. Growers report honeyberries sell out very quickly at farmers’ markets.

In the wild, honeyberries are found growing at the edges of wetland
s and in the shade of boreal (evergreen) forests across Northern Europe, Siberia, Northern Japan, and Canada. In the US they are found in the northern Midwest and in the NE from northwest Pennsylvania through New England. Honeyberries should not be confused with the exotic, invasive Amur and Tartarian honeysuckles. Honeyberries are not invasive; in fact, they need care and attention from humans in order to grow and thrive outside of their native habitats. Although they are cold-hardy to -50ºF, they do not

compete well against grasses, and some are damaged by direct sunlight at southern latitudes.

In the wild, most honeyberry fruits are rather small, and flavor can be quite variable, from sweet-tart to bland or even bitter. In Russia and Japan, extensive breeding programs dating back decades resulted in the development of larger, better tasting berries on more productive bushes. In contrast, honeyberries were ignored in North America until quite recently, but brand new breeding programs by Dr. Maxine Thompson at Oregon State University and Dr. Robert Bors at University of Saskatchewan have already yielded some dramatic results. Cultivars producing better-tasting berries and more than twice the size of any in Asia are now available to growers in the US and Canada. Some of these new varieties are suited to mechanical harvesting.

Despite the rapid advances in the development of honeyberries, some significant challenges remain to be overcome before they become an important berry crop in North America. In the nursery trade, honeyberries of Russian origin dominate the US market. These Russian honeyberries bloom in March, well before the bees needed to pollinate them become active. This, pus their susceptibility to sunscald and foliar disease make this strain the least adapted to our latitude and climate. Worse still, some of the Russian cultivars were deliberately bred to have bitter-tasting berries for adding to Vodka. Some of these have found their way into the US market, leading some to believe the hype about honeyberries is fraudulent.

A great deal of work needs to be done to explore the limits of the honeyberry plant’s adaptability. “How far south can it be grown?” is a question that remains to be answered (current speculation is that zone 6 or 7 will be the limit). How much moisture do these plants need? Though they are found growing at wetland edges, it has been found they grow best in moist but well-drained soil. No one yet knows what the ideal ratio of shade to sunlight will be, or if this ratio will varyat different latitudes. Fertilizer requirements remain unexplored, except that N rates normal for blueberries can be lethal to honeyberries. Recommended plant spacing is just a guess at this point, and will be different for hand-picking verses mechanical harvesting.

One of the most serious problems facing this crop is the name. Many growers and researchers have adopted the Japanese name “haskap”. Others are using the name “honeyberry”. What you call a crop has a profound impact on its marketability. There are many examples of this, but one obvious case is the “Chinese gooseberry”. This plant was grown in the US for over 150 years, yet no-one was even interested in eating them until the name was changed to “Kiwi fruit”. It takes no explanation for why growers chose to replace the name “choke berry” with “Aronia berry”. “Honeyberry” is an excellent name for something you would expect to taste delicious. “Haskap”, to the ears of Americans, may refer to the lid for a special container for hazardous waste. Although I believe the name “honeyberry” will eventually prevail over “haskap”, I also think that the sooner we kill this name, the better.

Honeyberries are not well known in this country; in fact, most Americans have never heard of them. Much needs to be done to educate the public about this new crop, but I have no doubt that a native berry that tastes this good will have a bright future.  – Tom Wahl